Book with AMEX AND Video Your Hotel Room Before You Leave!! 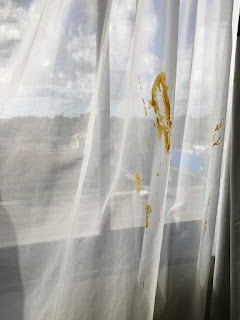 So my family were off to a chain hotel for December Break as the point level for this one hotel was extemely reasonable to stay for December Break, and they were willing to upgrade us to a suite that we could all fit into, if not perfectly comfortably, at least fairly so.

It was in Fort Lauderdale.  The hotel does not matter to this story, but know that trying to get an in-advance upgrade for a family of 6 is not something that most Florida hotels will do at peak season so when they were willing to, I jumped at it.  Having status with the chain ALWAYS helps.

We stayed for 14 nights.  The housekeeping service was AWFUL and after complaining more than once, a front desk staff member asked me when I would like them to come to do a full clean.  I told them the next day at 12pm.  As we came back from a day of fun at 5pm, they had JUST finished the room, but at least, they did clean it fairly well for the FIRST TIME.  It was NOT the regular cleaner.  That was the one that would not come back later when asked, would knock on the door and hand us towels, and then leave instead of clean the room.  The regular cleaning staff person likely sprayed the curtain with a leftover bottle of mustard that we had left on the counter before we left in revenge for getting in trouble with the admin.
Hours after leaving, after arriving in Buffalo and loading the van, I get a call from the front desk manager that claimed an astounding $650USD in damages that occurred "all over the curtains, bedspread, and other things."  AMEX was AMAZING.  I don't think hotels like to deal with AMEX as I got the impression that AMEX's charge back documentation (since I went to AMEX about the unauthorized charge) that the hotel needs to provide them is so burdensome, that many hotels just can't be bothered to fill them out.  Well, this hotel certainly did not or at least did not provide enough evidence to back their claim.
It goes without saying that we were totally innocent of  what looked like mustard stains on the sheen of the curtain.  There were no other pictures but those of the minimal stain to the curtain ever forwarded to me.  We demanded more pics to show the evidence that was worth $650USD along with an itemized list of the charges to replace these things.  Don't even go there--about why they didn't try to launder these minimal stains. The experience was a colossal waste of my time, with chains of emails that went unanswered by the management, the attachments to AMEX's website, the phone calls to the hotel chain's customer service, and I've learned from all of this to always take a brief video of my stay as we leave, with the TV on a news channel to back the time and date when the video was taken.  All it takes is one disgruntled or racist worker to make a free stay cost you more than you bargained for.
If you don't video before you leave, and as you leave, you will wish you had, and then you need to take your complaints as high in the organization of the chain as you can.  I ended up dealing with a supervisor's supervisor to get someone who treated me with respect and believed me, just in case the hotel should find some time to try to restart the claim with AMEX at some point in the future. Also, record your conversations on your cell phone.  That's how I had evidence of the outrageous claims by the front desk manager who was likely in on it, and the threats to blacklist me with the chain.
Customer beware!!
Posted by Steve's Deals at 13:31